I know the current text only layout stinks, but this page is being updated, so please have some patience... ;)

My studio is built around my PC. Until a couple of years ago, I've used an Atari Falcon with very good results, but eventually I decided that I wanted some of the extra functionality offered in Cubase VST and SX - with more audio tracks, possibility to use plugins effects, as well as taking advantage of the huge amount of other software and hardware available for PC, so I changed platform. The software I use is Cubase SX and for more info about the computer itself, look further down. I don't like the idea of mixing by using the mouse and a computer monitor - it's not accurate enough when doing it in real-time, and old-fashined me wants to do the final mix by hand.

I don't like the design of the available digital mixing consoles, because they can't offer any overview of all the functions - you have to go in and out of various menus to be able to set different things. I guess I'll buy a digital mixer some day, but not until they look like the normal analog ones that I'm used to work with, with knobs for every function and an unbeatable overview. I like using my mixing console even though it doesn't give me any automation - I believe that if you rely very much on automation, you probably made a poor job when recording. I'd say that if you make a good job during recording and preproduction, you shouldn't have to make other than very small adjustments during mixdown - but that's my point of view - and naturally, it depends on the way you want to work with your system...

Ok - the text above wasn't really valid, since I found myself buying a digital mixer after all... I still miss the unbeatable immediate overview of all controls that I had with the old analog board - but the possibility to connect 16 digital channels between the soundcard and the digital mixer - as well as the improvement in sound quality gives me a good reward for changing to the digital world...:) I also found out that there aren't so many menus to swap through - not in the DDX3216 anyway (even though it's packed with functionality), so it's quite nice to work with after all.

The pictures are about to be updated...

The latest addition to my studio were a pair of new nearfield monitors. ADAM P-11A are the best monitors I've ever heard in this size. They've won varrious tests where they compete with Genelec, Event, KRK and others, so I'm not the only one who like them... ;)
The previous addition to the studio was Behringer's new digital mixing console, DDX3216 with an ADAT-interface
This is the perfect companion to my RME Hammerfall, with digital transfer between the soundcard and the mixer. A real killer with more and better features than the competitors - at a ridiculously low price! :) 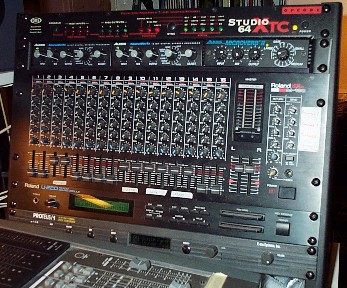 Intel P4 2,8GHz
Motherboard: Intel D875PBZ
RAM: 1GB DDR 400
Graphics: Matrox G450 Dual Head 32MB AGP
Music soundcard: RME Hammerfall
8-channel A/D-D/A-converter: RME ADI-8 PRO
2-channel A/D-converter/micpreamp/compressor/de-esser etc: RME ADI-96 PRO
Games soundcard: SoundBlaster Live! Player 5.1
SCSI-card: Tekram DC-390U2W
System harddisk: Seagate 120GB Barracuda5 EIDE/UDMA
Audio harddisk: Fujitsu 9.1GB Ultra Wide LVD
DVD-player: Pioneer 106S 16X/40X slot-in IDE
CDRW-burner: Yamaha CRW8424S SCSI
Midi interface: Steinberg Midex8, connected to USB
The computer is housed in a "Lian Li" aluminium miditower and I have a cooling system for the audio harddisk with aluminium cooling fins and two small fans from fre front, to make sure it doesn't heat up too much.
I have a quiet PSU and a quiet CPU-fan - both from Zalman, as well ass some fleece-mats for damping the sound. I am trying really hard to get the noise level down - and I'll keep experimenting until I get acceptable levels...
For the moment, the largest sound source is the older SCSI-disk, so I'll get rid of it and replace it with a Seagate S-ATA disk soon.

This system works in absolutely perfect sync with both audio and midi. I actually made a test of the "sample accurate sync" with 26 stereo tracks playing the same mix through the same D/A-output and there was no side effects at all, like chorus or flanger effect. My old Falcon system had a very high grade of this kind of side-effect (even though I never checked how much latency the Falcon system had, I know it's MUCH higher than I have now...), but there's absolutely no trace of it with the new system. It also provides a perfect sync between audio and midi, so I have no complaints at all about making music with a PC :)
RME's system with Zero Latency Monitoring is another great thing. When recording audio, there's no problem monitoring the D/A-output, since there's no delay at all (ok - not really true... there's actually a delay of one sample, according to RME...)! It's not different from using a reel tape recorder or similar and it's not necessary any more to monitor the input signal from the microphone since it's sent without any delay directly to the D/A-output - something that makes life a whole lot easier when using a separate mic preamp... :)
I also made a small comparison between different harddisks. When using an old "Fast SCSI-2"-disk, I managed to get 20 stereo tracks without any plugin effects in VST before I ran into problems. When I made the same test with the Ultra-Wide LVD-disk, I managed to get 26 stereo tracks - all of them running VST's built-in compressor - and a TC Reverb plugin on the master out. The system wasn't overloaded even so, but had just about no screen updates (but the music continued playing anyway)... When skipping the TC reverb, it was still a bit slow, but useable without any problems. I guess I'll upgrade the CPU soon - but on the other hand, I doubt that I'll be using that many plugins, since I like having the outboard equipment instead.
Those tests were actually made before the upgrade before my most current one, so the results are actually valid for an Intel PIII 450 CPU and an ASUS P2B-F, which worked flawlessly. I'm planning to make a new test again, since I've made a few changes to the computer. I'll present the results here eventually.