I'm from Sweden - living in Malmo (which is connected to Denmark's capital city Copenhagen by the Oresound bridge), where I was born in 1964.


Work
For about 12 years I've been a computer technician, starting the first 8 or 9 (at Compro AB, ScandBiz AB, Mr Data AB and Mr Data Syd AB - in chronological order) with various home computers, like C-64, Atari and Amiga. The last 3-4 years I worked more and more with PC's instead, which wasn't as fun as the old machines since there is hardly any real hardware technical skills required any more - you just exchange complete units, like interface cards, motherboards etc instead of repairing at component level. Besides the repairing, I handled of customer support (hardware and software), as well as now and then making service visits to customers. I also had to build new PC's - something that's among the most boring things to do (at least after a couple of hundred...).


Change of direction
I quit at Mr Data in March -98 and began working at the international company DataLogic, where I worked as a hardware engineer, repairing and installing barcode scanners (mostly industrial scanners at logistic companies, luggage sorting at airports, automated warehouses etc). I was also more deeply involved in some projects and worked partly as a project manager.
Part of the service department was outsourced from Datalogic during spring '99 and moved to another company, DNSit AB, where I worked for a couple of months to get things started. When everything was up and running, the people there had been educated and we had established a good working relationship, I moved back to Datalogic again.
After a centralized decision by the italian mother company, all repairs became outsourced in november 2006 - so then I moved to DNSit again, to continue using my big experience from repairing the Datalogic products. In 2010, Datalogic changed policy and decided to take care of their warranty repairs at the factories instead of using their outsourcing service partners. This led to a decline in the volume of repairs - and eventually, to my unemployment in february 2011.
In december 2012 I started working at Bluestar Nordic, as technical support for the Nordic region - a very exciting job with constantly changing problems to dive into and help the resellers with. With my wide experience with Datalogic products, I had a good deal of expertise about products and knowledge about the automation branch, so I could jump into the work right away and use much of my previous knowledge and didn't have to loose time learning everything from scratch, as I would have had to if I hadn't found this job. Very nice indeed! :)
All good things must come to an end... BlueStar HQ decided on global cutbacks and since I was the last technician employed, I had to leave the company late 2014.
January 2015 was a new start in a new branch for me, when I started working at Entomed MedTech. There I'm working as a service engineer, repairing and calibrating medical equipment for audiometry tests and for fitting hearing aids. A very nice job, since I know that my work is helping people with hearing problems. This is really my place and there's no end since calibration is required annually for medical equipment, so I believe it will last for a very long time - and since it's a good feeling to know that people get help, it makes me happy too. It simply wouldn't be possible to find a better place! :)


So far my profession - now to my time after work
After the election in 2018, I was elected to a political position in my spare-time, in the "Work market and social committee" in Malmö town, for the conservative party "Moderaterna" for 4 years to start with, but it's very interesting and stimulating to be part of this, so Ihope I'll get an extension of the assignment for the next term too.
In 1998, I started a small business selling computer and music equipment, as well as making some special services available. From the start, I mainly focused on Atari owners, since the constant decay of retailers made life hard for them - and for nostalgic reasons, I didn't want to abandon them even though I moved on to a completely different branch in my profession. Later, I moved the focus more toward the PC market, mainly on pro music equipment and other things that are hard to come by in "normal" computer shops. I manage this business in my spare time because it's very hard to build a business you can depend on, when there's much competition from others who are already hugely established. Nowadays, I've quit completely with the Atari products, since there's simply no market for them, so the business is completely concentrated on the music studio range of products. My business is called Holmerup Musik & Data (the website is entirely in swedish).

Music
I've been playing the electric bass for more than 30 years. I grew tired of playing in different bands several years ago because of all the compromises you have to make, so now I'm on my own making music.
During the years, I've also worked on and off as a sound technician both at live performances and in studio recordings, as well as doing some producing and music arrangements, playing the bass and singing backing vocals - both at amateur and professional levels. I've also made jingles for radio commercials occationally.


Test recordings
A couple of years ago, I started a crazy project. I decided that I should try to take advantage of my business contacts, in order to borrow various microphones and make test recordings. The aim is to include as many as possible of the popular microphones, so that people can download the recordings and compare on their own. I make this available for free and hope that it helps people somewhat when they're about to buy a new microphone. However, it's important to be aware of the limitations, since their room is most certainly different from mine, as well as their voice etc - but the recordings can at least give an indication of which models might be interesting. I've put up two websites for this, with the same content - one located on servers in USA, at testrecordings.net and one on servers in Denmark, at testing.holmerup.biz - all in order to give the best possible service to those who are interested.


Love is the drug
I consider myself very lucky, since I have an understanding fiancee who shares my musical interest and usually sings the lead vocals in my songs. She was employed in the opera choir at Malmo Opera house several years ago and has a beautiful mezzo soprano voice. Now, she mostly sings pop and soul songs, but also the occational opera aria. :)
We found each other in 1990, at an amateur theatre where she was part of the ensemble and I arranged much of the music - so we've been together for quite some time. :) In 2001, we bought a house in a nice and quiet part of town. 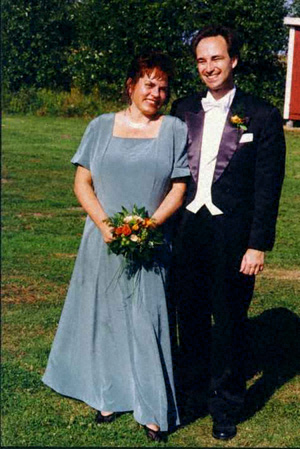